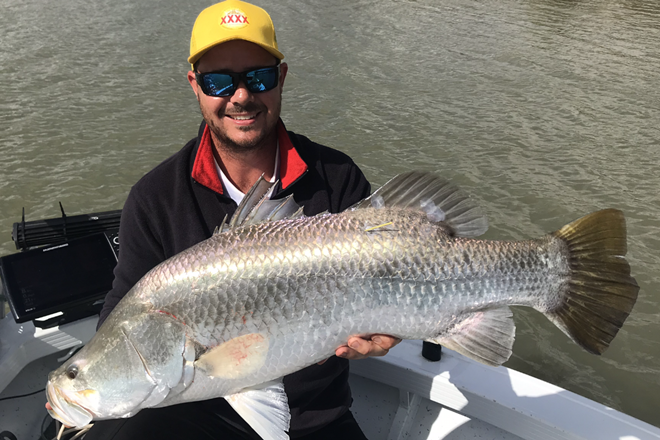 BREAK out the winter woollies because it is now officially July.

Before we get into all the good oil from the Frenchville Sports Club Fitzroy Barra Bash, we’ll take a sneak peek at what’s been happening locally and what we can expect to see. In the estuaries two species have ramped up. The first is blue salmon. These guys can be found in schools of hundreds and are suckers for an erratic soft vibe. This would be the number-one technique that anglers target them with. If they aren’t responding to the old lift and drop technique, then throw in a few wild kicks. You’ll be surprised what will get them fired up.

Coorooman Creek has been the most reliable for blueys. Brendan Warren recently visited Coorie with his young fella Quinn. They had a ball catching blueys off the rocks right beside the ramp.

The other species that’s started firing is the humble bream. As soon as the temperature dropped, the bream action heated up. The favourite spots for bream have been Coorooman, the Causeway and Corio Bay, with oyster rocks and gravel bars the most reliable ground. In saying that, Brendan and Quinn went and worked some of the snags in the Causeway after their Coorooman visit and did very well. Light line makes good fun for the youngsters.

We had our first dose of good winter weather recently, with some positive reports. All the bottom species bit well including red emperor, large-mouth nannygai and trout. Some hefty goldband snapper were also in the mix. Most of the guys I chatted with said putting in the extra effort to get fresh bait made the difference. Catching your own fresh baits and securing live bait like yakkas will improve your chances tenfold when heading out onto the big blue.

Big spanish continue to run well, with the pick of areas being Flat, Perforated and Manifold. Reports from around the islands are that spanish, school and spotty mackerel have been very sporadic. School mackerel were being caught at places like Iron Pot one day but were gone the next. One thing is for sure, a bad day on the water is better than the best day at work.

There’s only one way to find out if the mackerel are there and that’s to go and check it out for yourself. Fresh baked mackerel with a few chips would be one of my favourites. I might have to have a go myself.

Frenchville Barra Bash
First, a massive thankyou to all involved in making the Barra Bash a success. So many people work behind the scenes, and every single one of them needs to take a bow. It’s only in its second year but anyone would think the event had been running for decades. With so many awesome giveaways, even a few of my mates walked away with the likes of Edge Rods and Daiwa Zillion reels.

Steve Lill had the MC duties once again after a stellar performance last year, and the crowd was delighted with his performance. On registration night, Steve highlighted how hard the comp was going to be. Most Barra Bash competitors had been out pre-fishing and the grapevine was buzzing with the news that plenty of barra were out there, but the bite was tough. This year, because the Fitzroy River was still recovering from minor flooding, organisers decided to include the rest of the Rockhampton net-free zone. It was a wise move, with 30 more teams competing than last year.

The rego night went well with everyone brought up to speed and loads of prizes given away. Rego night activities were kept brief, as organisers were well aware that everyone would be keen to get some sleep before the two big days ahead.

The first day of the Barra Bash was tough. With water temps falling, the Fitzroy was the place to be; unfortunately, most of it was unfishable. Other areas like Corio Bay, Coorooman and Port Alma came to the fore. Throughout the entire area only a few spots hold barra. Technology has made these spots available for even the newcomers. Moving between spots was hard.

Getting on a productive area at the right stage of the tide was even harder. I said, ‘hard, not impossible.’ The local gurus were in the know. The Lill and Spyve brothers had chosen to dodge a few crowds and head up to Corio Bay. Craig Griffiths and Colin Brett are two very talented anglers who do well on a tough bite, and both chose to fish from the Port Alma area. We made a few unproductive decisions from day one but were rewarded with one solid bite from a 92cm barra on the deck.

Team Edge Rods of Griffo and Karim boated three. Colin Brett and Mick Slade from Edge Rods/Lucky Craft also caught three. The Spyves did well, boating four from Corio. Team Hazard came in second with five, but the Lills were the shining star with five whoppers. After day one we were sitting at 17th. We weren’t feeling too bad as more than half the field hadn’t boated a barra. Yep, that’s how tough things were.

We had to refocus for the final eight hours on day two. We had some serious discussion about what we needed to do from what we had seen on day one. A plan was hatched and we stuck to it. It was a wise move and it paid off. We caught five barra on the final day, with our last one boated and photographed one minute before knocking off. Edge Rods hit the turbo button and landed seven on day two.

Edge Rods / Lucky Craft were solid as always, landing five. The Lill and Spyve brothers landed three each. We were confident about the top three but the fourth and fifth place would be a tough call. The best part about any competition is the hype and excitement. No scoreboard updates on the final day just builds intensity.

For the Barra Bash presentation night Steve Lill was joined by the Honey Badger himself, Nick Cummins. These pair absolutely killed it on stage. The jokes were coming thick and fast and the crowd loved every minute of it. With Iron Jack the major sponsor, everyone was rewarded with Iron Jack on tap. I know I had my fair share and it’s a pretty good drop if you haven’t checked it out.

The Frenchville Sports Club put on a great buffet dinner. It’s one of our family’s favourite places in Rockhampton to drop in for lunch or dinner. It was now getting down to presentation time. The biggest surprise to everyone was the quality of king salmon caught.

Even on the first day three threadies over 1200mm in length were caught, with the biggest 1280mm. The overall king threadfin champion after a minor electronic glitch was Shane Petty with a monster coming in at 1400mm. Boden Spice was next at 1390mm. Four threads cracked the 1300mm bracket and another five were in the 1200mm range. The most metres of king threadfin saw a hotly contested field.

The Spice Brothers were the most consistent over the two days and took out the category’s first place, with a bag consisting of 12.235m of king. Barra Havoc came in second with 9.910m. The next prize was for the biggest barra. Ben Fulton was out on his lonesome with the only metre barra for the comp, which won him a cool thousand dollars. Boden Spice came second with a 950mm specimen.

Most metres of barra for teams was up next. I’m glad to report our team Downtime managed to grab fifth place with 3.93m. In fourth place was the River Rats with 3.94m. Third went to the Idnumarrab Brothers with 5.02m. Second place was taken by Edge Rods/Lucky Craft at 5.1m, and Edge Rods convincingly kicked butt with 7.77m.

Once the Barra Bash presentations were done it was time to live it up. Not many people went straight for the door. Most hung around to talk fishing and drink beer. Morale is very important with most comps and the Frenchville knows how to cater to it very well. Everyone fished their butts off and the overall captures highlighted that it was in fact a tough competition.

Only 95 barra were caught for a total of 63.37m and 42 king threadfin for 44.235m. This was well down on the previous year, with conditions having a lot to do with it. The Sunday after the comp was an all-new family fun day competition. Families were encouraged to have a go for free at trying to snag a barra. I dragged myself out of bed with a proper headache to take part.

We didn’t manage a barra but caught some goldspotted cod and one hell of a flathead. Some cool prizes were given out and the draw of a mint Polycraft boat had the crowd buzzing. Unfortunately, I didn’t win the boat but I had a marvellous time over the entire weekend. If you’re a keen angler who wants to jump on board the fun, then make sure you look up the Frenchville Barra Bash next year.

I can promise you will have the time of your life and make some new friends. A massive thankyou to all the sponsors that make the Barra Bash what it is. Fishing the Rockhampton net-free zone should be on everyone’s priority list.