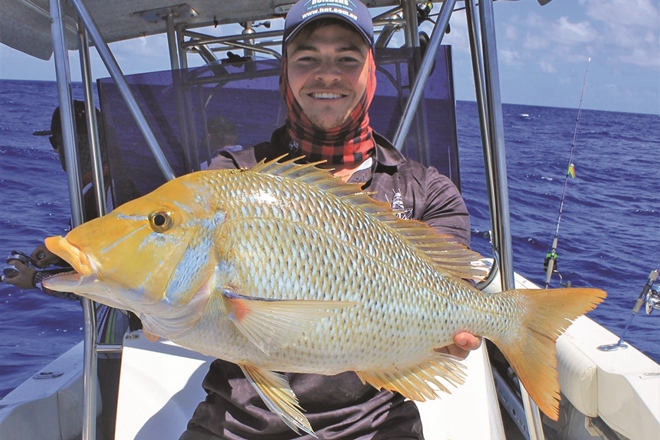 FISHING a new place is similar to the first day at a new school.

You either make a heap of friends (catch plenty of fish) or you don’t get along with anyone too well and don’t enjoy your time (catch nothing and bomb out). Fortunately, on my first 1770 fishing trip I made a heap of friends. To say it’s a whole new world of fishing there compared to Brisbane is an understatement.

I was lucky enough to get holidays over Christmas and into the new year, so we organised a week-long 1770 fishing trip, a place we had never visited, let alone fished, so a week-long trip offered a really good opportunity to explore and find out more about what this lovely place had to offer.

On arrival at Agnes Water/1770, first impressions were it is a hard-core fishing village, with boats and travelling anglers like ourselves everywhere.

First on our list was to head to the ramp and check out the facilities. This is always a good option before you quickly go and dump your boat in the drink, especially if you’ve never used the ramp before. Luckily for us, the facilities were top notch.

As we rolled down the hill and around the bend towards the ramp I could see a procession of trailers and trucks parked up. This told me plenty of people were on the water and it was going to be a busy ramp in the mornings and late arvos.

We found a spot for my truck and Shortbill so we could go and have a chat to a few of the fishos returning from the ocean. The first boat we walked over to had a pretty decent catch of coral trout and mixed reefies.

Chatting to a number of other returning fishos revealed plenty more of the same sort of catch. This is when the nerves set in. What if I couldn’t find fish and would end up looking like an idiot in front of my family?

The first day of 1770 fishing action had arrived and the weather gods had not turned it on. It was blowing 15-20 knots the whole day and it was a 60km punch out to the reef in short, sharp slop. Eventually we made it out to the reef and as soon as we were within range I started using my electronics to mark every lump and bump so we could go back and fish them later on. This is good practice if you’ve never fished an area. It’s good to first explore and see what sort of country you’ll be fishing.

You can always fish along the way too. While sounding around, set a spread of lures out the back and troll at about six knots. You never know what you’ll pick up out on the reef. After having a good sound around, it was time to go and do some fishing. I set the drift up and told the family to deploy their gear. Everyone was fishing a different technique and within 30 seconds everyone had a legal fish on.

When they all hit the deck I definitely breathed a sigh of relief. We’d picked up a good mixed bag of redthroat emperor and tuskfish, which by any means was a very good first drop.

The unreal 1770 fishing continued for the whole time we were on the water and a lot of personal bests were set and broken. Trophy fish after trophy fish hit Shortbill’s deck and every drop we would have a fish. It was pretty rare for someone to miss out.

The ever-faithful lightly weighted float line produced a lot of the good fish, but then again so did the plastics and soft vibes. The number of ways to fish these fish-rich waters is what impressed me most. Everything we sent out would get eaten. It was an awesome spot to get techniques down pat for fishing off Brisbane.

After catching a really good box of fish, I wanted to go and look around for more ground to ensure I had an arsenal of marks in the GPS for next time. So we set a spread of lures in the hope of drag-squealing action while we sounded around. As we came around the southern end of Fitzroy Reef I heard one of the reels going off and my brother screamed “Marlin!”.

I was blown away when I turned around and saw a black skipping around out the back. What amazed me even more is we had hooked the fish in just 13m of water, which is a similar depth to the micro black marlin fishery at Fraser Island. The spread was cleared and it was battle stations in Shortbill. After a five-minute fight we had the marlin on the leader.

For my old boy and two brothers, seeing a marlin was completely new and they were amazed at how acrobatic they are and also how gracious they are in the water. After swimming the marlin for a few minutes, it was rearing to go, so off it went and watching it swim away brought a smile to everyone’s face.

It was an unreal trip and something we will be doing more often. I could sit here all day in front of the computer writing about how unreal our 1770 fishing adventure was but basically it is something you have to experience for yourself.

If you’d like to come fishing with me one day, book a trip on Moreton Island Fishing Charters by giving me a bell on 0413 128 056.